Today was Day 3 (our second day of sailing) and the final day of the qualifying series at the 2019 49erFX World Championship in Auckland, New Zealand.

After a big rip in our kite in the second race yesterday, our spinnaker was in the loft overnight getting fixed, so this morning we collected the repaired sail and a bit of new sailing gear – yellow bibs to show that we were the regatta leaders after day one!

We were the second fleet on the water today, so we filled the morning working, reading and watching some of the guys’ races on the Sideline App, where all of our races are being live streamed. It was a good way to start thinking about the race course, and to get mentally prepared for the day of racing.

We towed out to our race course to tune up just after noon, and as we reached the course, the breeze started to drop from what the guys’ fleet had been racing in. The weather in Auckland has been amazing, with wind in the high teens almost every day for the last three weeks, and today was one of the first days that we’ve seen a light Northerly wind. We’ve felt really fast in the big wind, so today was an opportunity to go out and work on our light air technique and racing strategy. We ended up finishing the four races with an 8,9,13,17 which dropped us to 9thoverall. 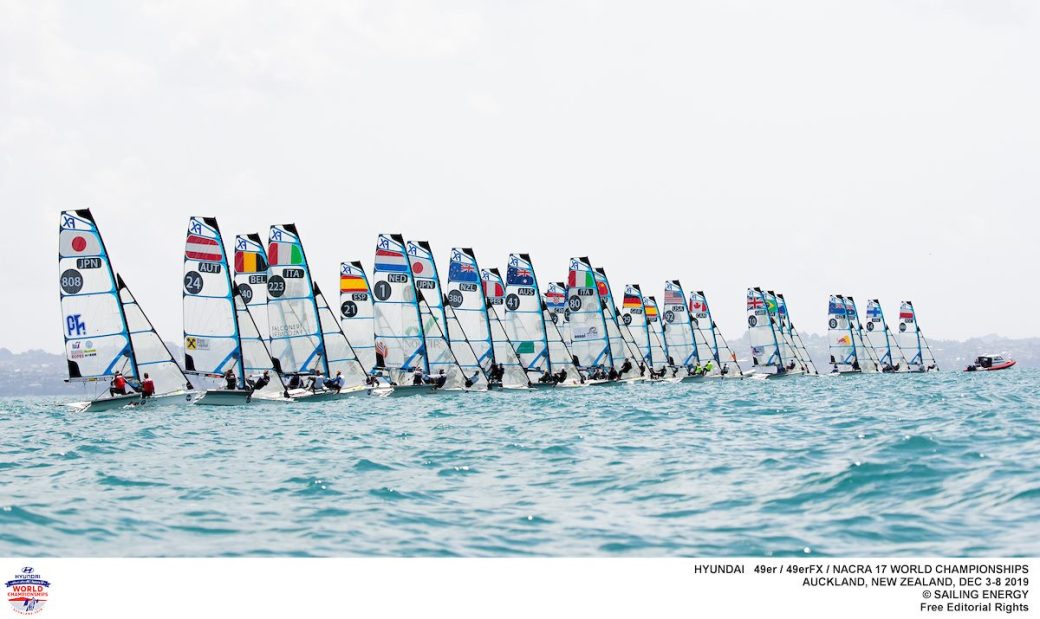 The conditions were quite tricky and with the wind being from the north east it created a little chop on the course which meant that being able to do what you wanted with your bow was very important.

The first race of the day was our best race.  However, it didn’t start fantastic.  We had a great start off the middle of the line, but after tacking onto port got pinched off by a boat to leeward of us and then in turn started to get rolled by a boat to windward of us, so were forced to tack a little farther out to lay line. We rounded the top mark quite deep but gybe set and got away from the fleet and made a big gain down the course.  We rounded the the bottom mark in around 10thand caught a few boats on the upwind leg to round the top mark in 6th.  At the finish we ended up crossing the line with two other boats and unfortunately, we were at the loosing end of that pack and finished 8th.

Race 2 started very similar and again we had a decent start off the line, but the boat that had started just to leeward of us was OCS, so they were a little more punched than us and made our lane quite hard to hang onto. We ended up slightly falling into them, but held long enough to be able to do a clearing tack up the beat that wasn’t costly.  We managed to find ourselves clean air and it got us to the top mark in around 9th.  We flicked spots back and forth with the boats around us but managed to hold on to 9th at the finish to score another top 10 race.

Race 3 started with a great start, on the hip of the eventual race winners and we held our lane out towards the left corner.  We found our time to tack as we approached the left side of the course and didn’t quite have the best tack that we needed and that put us into a little tricky situation of trying to not get rolled while still sailing fast up the course.  We did ok though and managed to round the mark in 8th.  Downwind the fleet was very close and as we got towards the bottom of the course, we found ourselves in the middle.  We made a decision as to which mark we wanted to round but ended up not quite getting in front of the boats that we needed to and rounded on the outside of two boats. It wasn’t a total disaster, however we did end up dropping quite a few places because we had to foot for a little to keep the speed going after the leeward mark. We dropped to about 18that one point, but climbed back to the low teens at the top mark and ended up crossing the line in 14th.

The final race of the day the wind seemed to be picking up just a little bit.  We could almost stretch our legs all the time, well maybe more like 75% of the time, but it felt better than doing a lot of crouching. We had a decent start off the line, and again headed to the left.  The wind had started to clock to the left during the third race and now the numbers were much more left in general than the first two races of the day.  We had a great lane once we tacked onto port and were looking great relative to the fleet and then we got tacked on.  I know its part of the game, but it was so frustrating at the time.  This caused us to have to tack out again which put us in a little more difficult of a position as we approached the windward mark.  Its part of the game and now looking back on it, there wasn’t much we could have done about it, and there are plenty of times we have tacked on people too, so there are no hard feelings…its just sports. We fought hard during the race for every point and ended up with a 17 at the finish line. 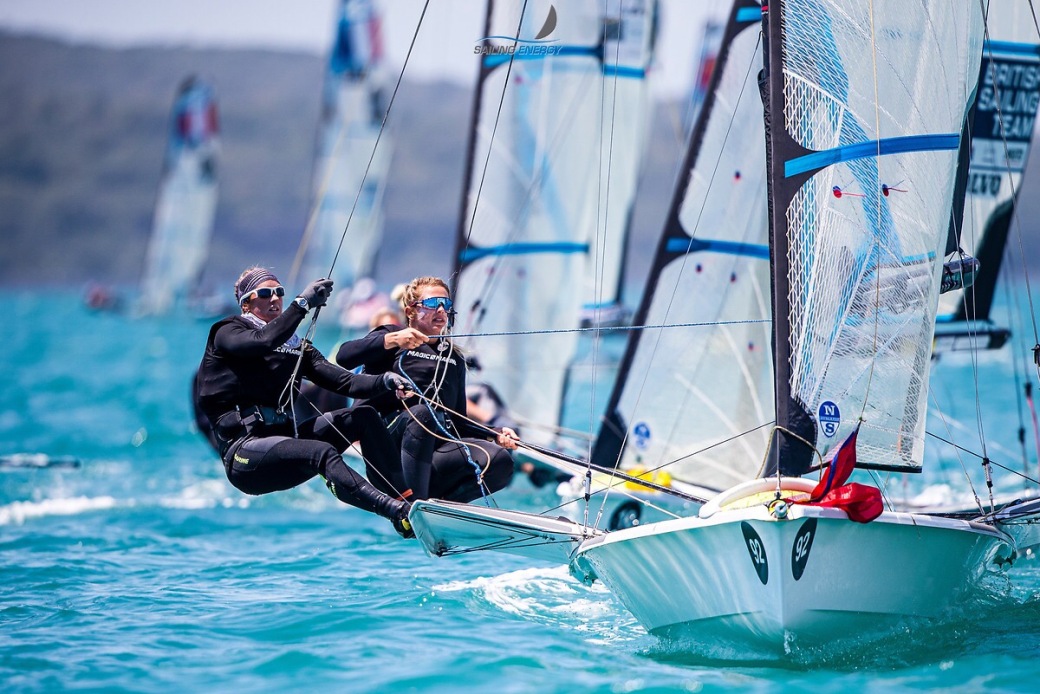 Although we dropped in the overall results and it wasn’t as good as a day as yesterday, it could have been a much worse day. It turned out to be one of the better days we have raced in those conditions, so we are overall happy with the day.

We qualified for Gold fleet currently sitting 9th overall. Tomorrow our racing starts at 11am and hopefully there will be some more breeze!

Help us get to our second Olympic Trials event in Australia! Donations are tax deductible!